My friend and I joined Marrakech Travel Services for the full day trip. It’s quite a long journey from Marrakech – about 190 km and 4 hours each way.

The first part of the journey through the flat desert-like landscape was rather uninspiring. It’s just as well that I had my earphones on to listen to my music while catching up with my sleep. After all we were picked up at 8.00

The journey became more interesting as we got near to Essaouira. The visit to an association of Berber women producing argan oil provided a welcome break to stretch the legs.

Look! Goats on the trees!

Apparently goats are an important part of the production of Argan oil. They eat the spiky fruits and their droppings contain nuts which kernels are used to produce precious Argan oil

Essaouira on the Atlantic coast is not called the Windy City for nothing!! It was just as well that I had on a pair of comfortable trousers instead of a dress or skirt!

Our minibus arrived shortly after noon to be joined by 2 others and a local guide who took us to the port. That’s where we lost the guide as we were too busy taking photos!! But we spent the next 4 and 1/2 hours pleasantly exploring the city by ourselves

Beyond the Harbour Gate ….

Beyond the Harbour Gate was the spacious Moulay Hassan Square with lots of restaurants and cafés for something to eat and drink in the sun, watching the world go by. And then of course there were shops around the corner!

Dar Souiri – the hub of cultural life in Essaouira

We decided to pay 60 dirhams each to go up to Skala du Port. We only paid 130 dirhams as they didn’t have the right change! Views from the bastion were great, though. On the basis that we were only going to be there once, it was worth it, especially as I managed to the photo shots that I wanted!

It was a long day, but I wouldn’t miss it for the world – for my fridge magnet and to be up at the citadel! 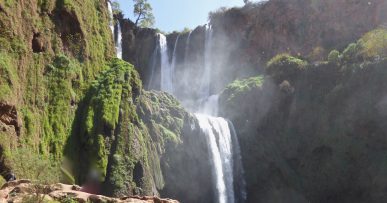 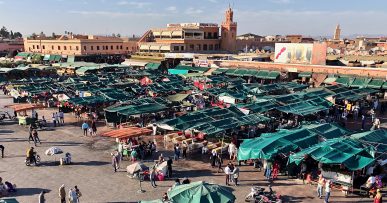 Marrakech is marvellous in March